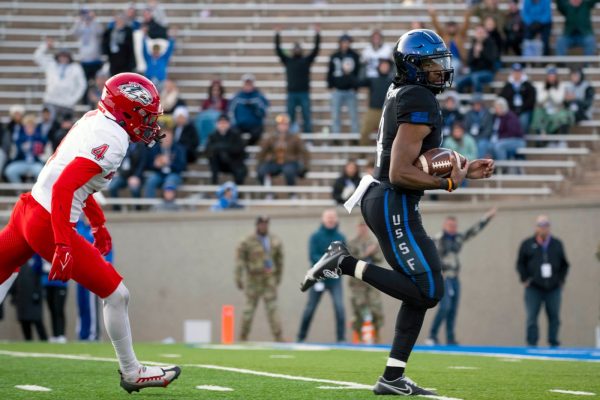 Daniels rushed for 113 yards, including touchdown runs of 65 and 37 yards. One of his two completed passes went to David Cormier for a 33-yard score. Daniels was 2-for-2 passing for 42 yards.

Roberts went over 3,000 career rushing yards and moved into fourth place on Air Force’s career list. The Ralston Valley High School product has 1,251 yards this season, which puts him in the top 10 of Air Force’s single-season list.

Lobos quarterback Justin Holaday was 10-for-21 passing for 128 yards and was sacked five times.

GOLDEN — No, that’s not a misprint.

The Orediggers (9-2, 9-0 RMAC) ran wild in their regular-season finale Saturday at Marv Kay Stadium, capping an undefeated run through the RMAC with 701 total yards, 32 first downs, 11 touchdowns and a field goal.

It marked the second time this season Colorado School of Mines has scored 80-plus points, with the other coming in an 84-10 win at Adams State on Sept. 17.

Quarterback John Matocha completed 13 of 16 passes for 281 yards and three TDs, including the 100th touchdown pass of his career, and backup Evan Foster completed all six of his passes for 60 yards and a score. Josh Johnston (two catches, 83 yards, one touchdown) and Max McLeod (6-89-1) both topped 1,000 receiving yards for the season.

The defense secured its second shutout of the season, with the Skyhawks (0-10, 0-9) gaining just 170 total yards of offense, including minus-3 yards rushing.

Mines is all but assured of hosting at least one game in the playoffs. The team will find out who and where it plays on Sunday when the NCAA reveals the Division II bracket at 3:30 p.m. on ncaa.com.